When he was a child, Robin Bayley’s grandmother used to tell him colourful stories about her father, Arthur, who left his wife and daughters in England to work at a cotton mill in Mexico – but had to leave in a hurry at the start of that country’s revolution. Robin was enthralled by these stories, but as he got older he had a strong feeling that there was something missing – something he wasn’t being told.

Despite enjoying the perks of a successful career in children’s television, at the age of 26 he decided to leave his job and sell his apartment to go on an adventure – rather like his great-grandfather had done before him. He set out on a quest to discover the truth about Arthur – or Arturo, as he was known in Mexico – which took him through Latin America and eventually to Guadalajara, where he eventually found the cotton mill where Arturo had worked. But Robin found much, much more than that. He found what was missing from the stories he’d been told as a child – a secret family. 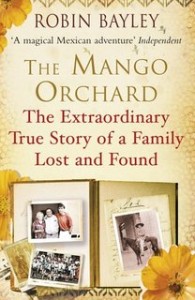 The result of his journey in Arturo’s footsteps is The Mango Orchard, a book which has been published around the world in several languages. And it was the process of writing the book that uncorked the bottle containing Robin’s storytelling genie.

Since then, Robin has been commissioned to write a film screenplay and has launched Wedding Speech Guru to inject some storytelling juice into wedding speeches. He is also a trained life coach, specialising in transforming people’s professional and personal lives by helping them to find their innate confidence and creativity; is licensed to conduct weddings in the state of California; and was once cast as a baddy in a Bollywood feature film. He also joined the Story Party team as a co-host.

Find us on social media

Sign up to get our weekly email featuring interviews, guest blogs, story tips and events news.