About this time last year I started thinking that I wanted to be more actively involved in storytelling.  It didn’t quite come out of the blue as I had also been really inspired by Jen Lee’s Finding Your Voice work and been consciously working, with Sarah Lloyd-Hughes, on my ability to speak out.  Learning from Jen first and then from subsequent online research about how popular storytelling had become in New York I started to believe that it might be possible to set up a storytelling event here in London and maybe it might become popular too!  Although I found that a few already existed, I had the sense that somehow there was room for more.

With the seeds of an idea I approached Beverley Glick who I had met through the speaking work I’d been doing with Sarah.  Beverley is also passionate about storytelling and having worked for many years as a journalist is now also offering story archaeology, which helps her clients to unearth their own stories so that they can find the gold in them and use them more effectively in their lives and businesses. 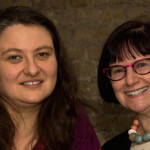 From the start there was something so natural about working with Beverley.  We agreed to experiment with the idea of running a storytelling event together.  Then Bev quickly came up with the excellent name, The Story Party and before we knew it we had advertised our first event!

As the event formed in my mind I started to see more clearly that storytelling is both an end in itself – something that inspires and entertains and also allows the storyteller to share something of themselves and, at the same time, almost paradoxically, something which, in my experience at least, can helped us to re-write our own stories.

It is as if, as I had chosen to explore the stories I had been telling myself about my own life enough to set them free and let other people hear them, so in the process I was becoming more able to transform the stories and begin to re-frame what I believed about myself.

I also found that by telling stories we start to identify and recognise the lessons we have learnt along the way and gain a deeper sense of how our experiences have brought us to the place we are now.  And as other people hear our personal stories and better understand where we are coming from they understand us better too – and between us we develop a deeper sense of the human experiences that we share.

Later this year I will be offering an e-course, called StoryPower which will invite you, supported by me way to uncover and re-imagine your story.  Sign Up to my Regular Reflections to hear more when registration opens on April 29.

At the first Story Party evening last September we had a group of 25 people and heard stories from Bev, Sarah, Nick, and Tony.  I read a story I wrote called Make Love Not War as well. The feedback was pretty good so we decided to look for a better venue and organise another event.

It was during our second event (after I had told a story myself and had time to relax a little) that I realised we were doing something that people were really enjoying.  That night the feedback was fantastic and we felt as if we were at the start of something really exciting.

At the third Story Party we heard such a diversity of stories from women of all ages that it almost brought tears to my eyes. The picture shows me talking with Hana, who shared a story with us about working as a life model.  If that fascinates you can read another story about a woman who took up life modelling later in life in my book Listening to our Grandmothers!

We are now in the process of organising our fourth event.  The theme of the event, which will be held in London on May 6, is A Memorable Journey.  If you are interested in joining us and want to book your ticket, click HERE.

We sold out last time so you need to book to be sure of your place.  If you are interested in telling a story at a future event get in touch with us and we can give you more information about what is involved.

This post was first published on www.maryannmhina.co.uk on  March 24 2014. Pictures by Rita Abreu for The Story Party – www.araphotography.co.uk.

Find us on social media

Sign up to get our weekly email featuring interviews, guest blogs, story tips and events news.